Women in the 19th Century

Women in the 19th Century

During the 19th Century, women had very few opportunities in life outside of the home. Women were seen as morally superior to men but physically weaker, resulting in the formation of a women's sphere that centered around home life. Despite this, women became key figures in social reform movements including those associated with women's rights.
​​​​​​​

"In civil and political affairs, American women take no interest or concern, except so far as they sympathize with their family and personal friends...In matters pertaining to the education of their children, in the selection and support of a clergyman, in all benevolent enterprises, and in all questions relating to morals or manners, they have a superior influence. In such concerns, it would be impossible to carry a point, contrary to their judgement and feelings; while an enterprise, sustained by them, will seldom fail of success."

- Catherine E. Beecher in "Peculiar Responsibilities of American Women" from A treatise on Domestic Economy for the Use of Young Ladies at Home and at School, 1841. 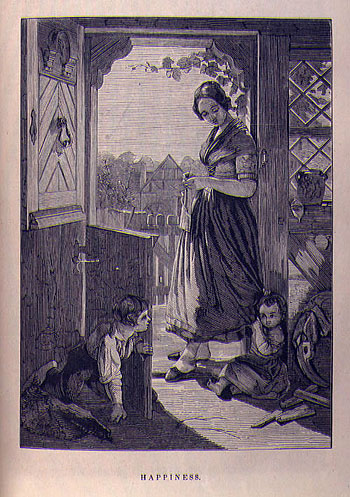 An engraving titled "Happiness" 1851. Courtesy of the University of Virginia. 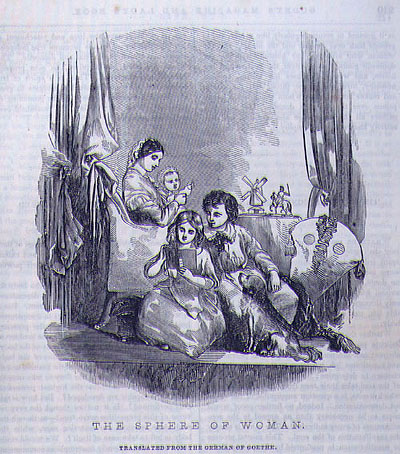 An engraving titled "The Sphere of Woman". 1850, Courtesy of the University of Virginia. 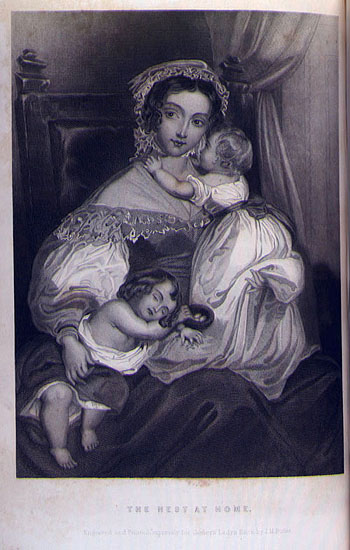 An engraving titled "The Nest At Home", 1850, Courtesy of the University of Virginia.

Above is a selection of engravings from Godey's Lady's Books. These images all depict women in a domestic setting caring for children and show that many female-focused books and magazines printed at the time emphasized domesticity.

"[Women can't be equal to men] first, God never designed you should, and secondly, your own deep instincts are in the way. God never designed that woman should occupy the same sphere as man, because he has given her a physical organization so refined and delicate that it can never bear the strain which comes upon the rougher, coarser nature of man... And now bear with me, and keep good-natured, while I show you, what you, dear ladies, cannot do, and God don’t ask you to do."

"The great gain would be freedom of thought. Women, more than men, are bound by tradition and authority. What the father, the brother, the doctor, and the minister have said has been received undoubtingly. Until women throw off this reverence for authority they will not develop. When they do this, when they come to truth through their investigations, when doubt leads them to discovery, the truth which they get will be theirs, and their minds will work on and on unfettered." 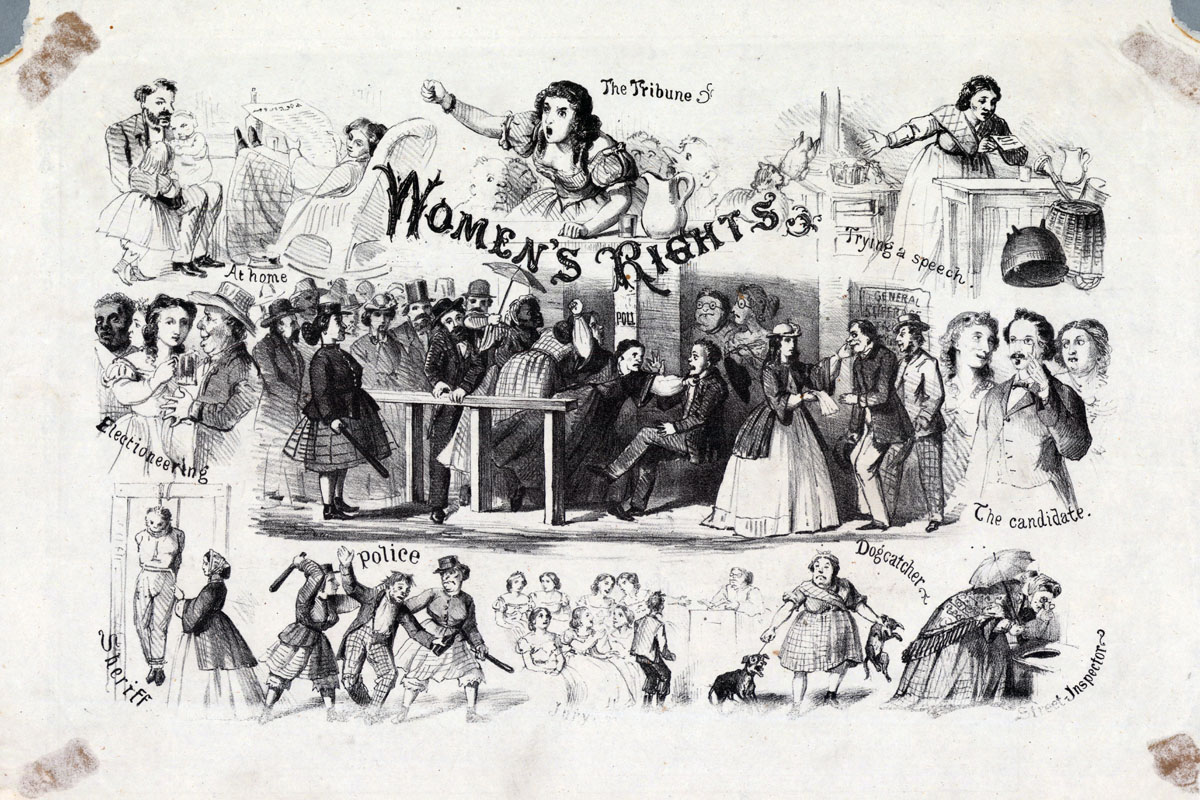 A lithograph titled "Women's Rights" by an unknown author. Circa 1870. Courtesy of American Antiquarian Society.

"...the dressmaker should no more be a universal character than the carpenter. Suppose every man should feel it is his duty to do his own mechanical work of all kinds, would society be benefited? Would the work be well done? Yet a woman is expected to know how to do all kinds of sewing, all kinds of cooking, all kinds of any woman's work, and the consequence is that life is passed in learning these only, while the universe of truth beyond remains unentered."

- An excerpt from Maria Mitchell's diary.

The women's club movement began in the 1860s and helped women gain status in society. These groups allowed women to change the world by providing a space, and an excuse, for women to gather outside of their house. Many clubs provided a way for women to use their domestic sphere to invoke societal change. 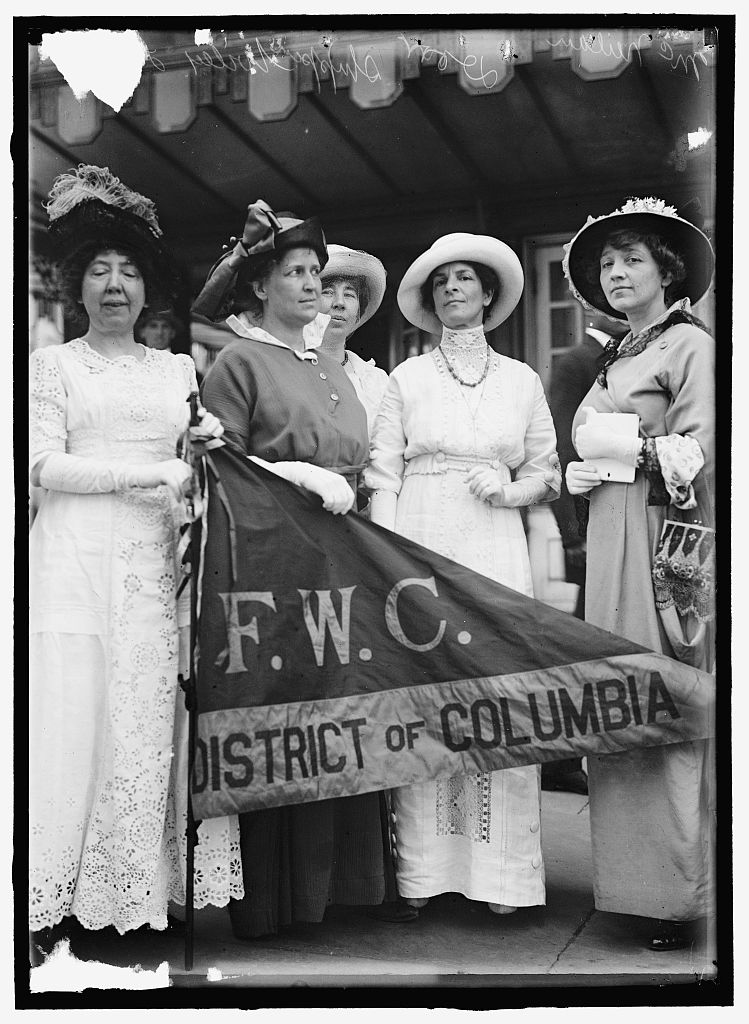 A photo of several women who were sent to the White House to represent the Federation of Women's Clubs. Circa 1914. Courtesy of the Library of Congress.

"The Declaration of Sentiments" from a pamphlet titled "First Convention Ever Called to Discuss the Civil and Political Rights of Women". Published July 1848. Courtesy of The Library of Congress.

"It is in view of such considerations that, at the present time, a large majority of American women would regard the gift of the ballot, not as a privilege conferred, but as an act of oppression, forcing them to assume responsibilities belonging to man, for which they are not and can not be qualified; and, consequently, withdrawing attention and interest from the distinctive and more important duties of their sex."

- Catharine E. Beecher in a speech titled "An Address on Female Suffrage" as published in Woman's Profession as Mother and Educator with Views in Opposition to Woman Suffrage, 1872.