Maria Mitchell made many scientific discoveries including becoming the first American to discover a comet. These discoveries helped show that women could prosper in scientific fields when they had a chance. However, as astronomy began to be considered a profession, the opportunities for women in the field greatly diminished.

Maria Mitchell became the first American, and third woman, to discover a telescopic comet on October 1, 1847. This discovery launched her into fame and made her the first woman inducted into the American Academy of Arts and Sciences. 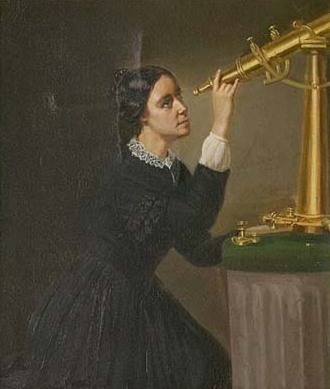 "On the evening of the 18th, while 'sweeping,' there came into the field the two nebulae in Ursa Major, which I have known for many a year, but which to my surprise now appeared to be three...The bright part of this object was clearly the old nebula—but what was the appendage? Had the nebula suddenly changed? Was it a comet, or was it merely a very fine night? Father decided at once for the comet; I hesitated, with my usual cowardice, and forbade his giving it a notice in the newspaper."

- An excerpt from Maria Mitchell's diary discussing her comet discovery. 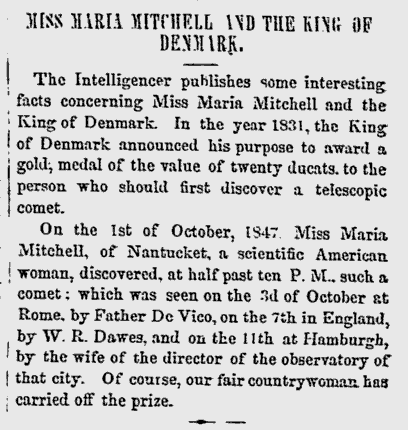 An article titled "Miss Maria Mitchell and the King of Denmark" from the National Era, March 22, 1849. 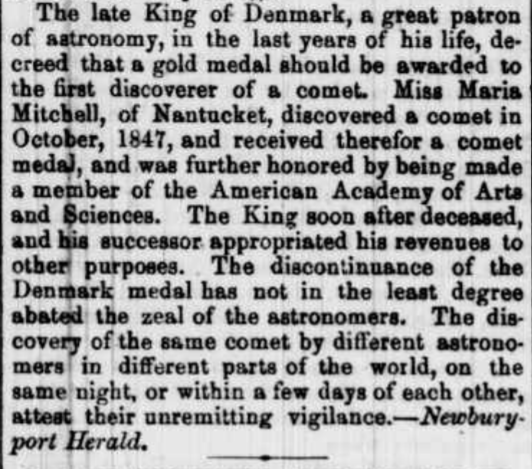 Part of an article discussing comets from the National Era, March 18, 1858.

Two newspaper articles discussing an award given to Maria for her discovery of the comet and expressing great pride in her accomplishments.

There were many other notable astronomers in the 18th and 19th centuries who made many important discoveries. These discoveries turned the field from a hobby to a profession and consequently prevented many women from pursuing astronomy.

"In conversing with persons who are not officially attached to Observatories, or in other ways professionally cognizant of the technicalities of practical Astronomy, but who, nevertheless, display great interest in the science of Astronomy generally, I have frequently been struck with two remarks. The first is, that these persons appear to regard the determination of measures, like those of the distance of the Sun and Moon, as mysteries beyond ordinary comprehension...The second remark is, that when persons well acquainted with the general facts of Astronomy are introduced into an Observatory, they are, for the most part, utterly unable to understand anything which they see..."

- Sir George Biddle Airy on other astronomers in his lecture series at Ipswich. 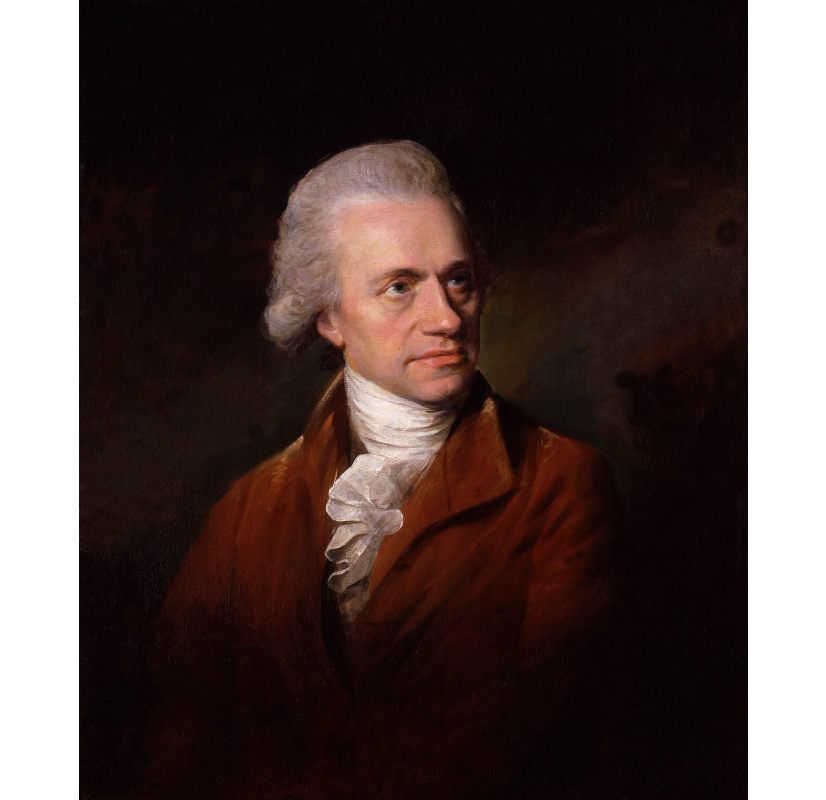 .A portrait of Sir William Herschel, the older brother of Caroline Herschel and discoverer of Uranus, by Lemuel Francis Abbott. Circa 1785. Courtesy of the National Portrait Gallery, London. 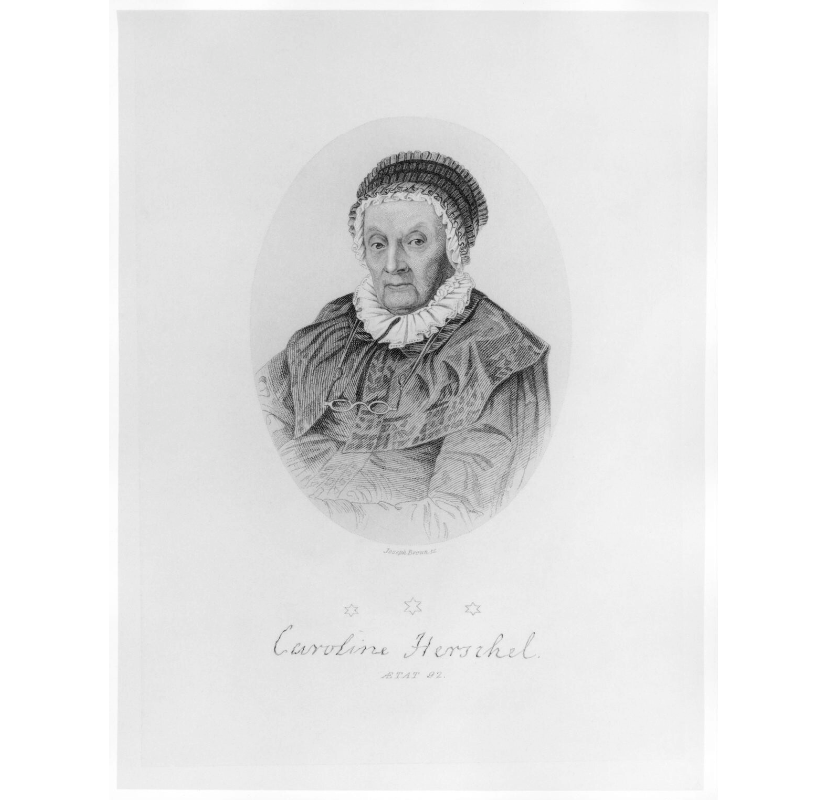 An engraving of Caroline Herschel, the first woman to discover a comet, by Joseph Brown. Circa 1842. Courtesy of the National Portrait Gallery, London. 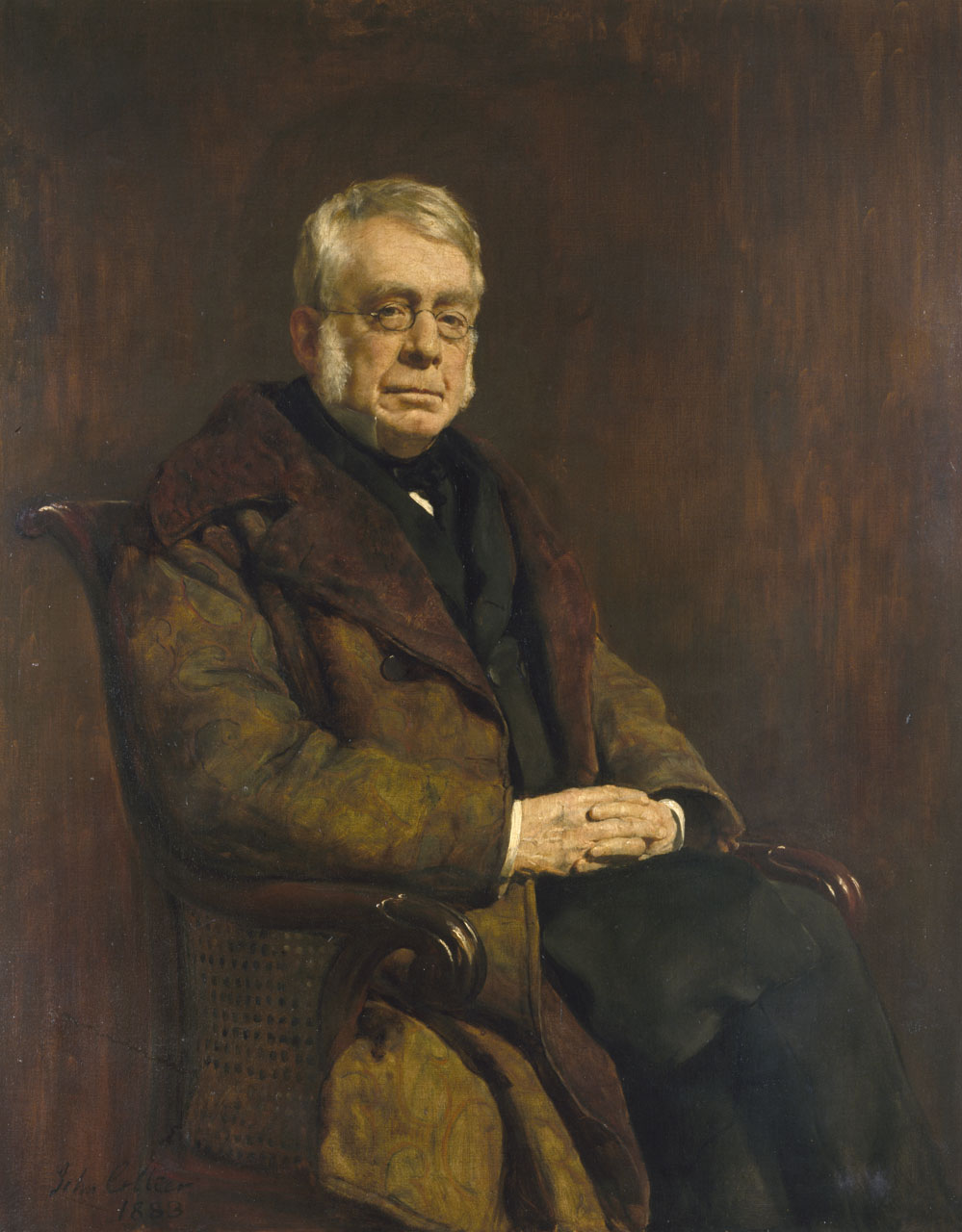 A portrait of Sir George Airy, the man who established Greenwich, England as the Prime Meridian, by John Collier. Circa 1883. Courtesy of the National Maritime Museum, Greenwich, London, Airy Collection.